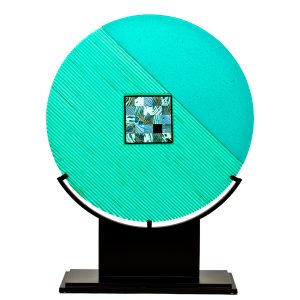 Although a native New Yorker, Steve Immerman has lived in the Midwest for the last 40 years, currently residing in Wisconsin.   Immerman has been working in glass for the last 33 years, but exclusively with kilnformed glass for over seventeen years.  Immerman uses glasswork as a respite from his more left brain and stressful career as a general surgeon and surgical oncologist.

He recognizes many parallels between kilnformed glass and surgery. “They each involve technical skill and precise planning in preparation for the portion of the process where the elements are left alone to heal (in the case of surgery) or fuse (with kilnformed glass). Both processes require intense knowledge of what is expected to happen, and neither allow much margin for error. Both combine science and art.”